This cheesecake bars recipe is so good. They are just sweet enough to counter the supreme tartness of the lemon and blueberry.  I baked them in a large 9 x 13 dish, but if you want thicker bars just do it in a smaller dish - adjust the baking time a bit though.  I used frozen blueberries, and even though I rinsed them well, there still was a bit of color bleeding into the cheesecake.  Fresh blueberries would be optimal.  I love cheesecake (who doesn't) and I love tart sweets - and these bars are a perfect combination. 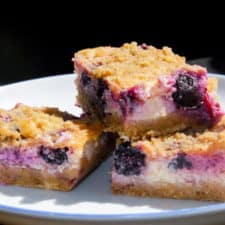 I believe comfort food unites us, and I want to inspire you to cook at home with everyday ingredients. It is easier and takes less time than you think, costs less than eating out, and tastes a million times better. END_OF_DOCUMENT_TOKEN_TO_BE_REPLACED